Having recently imported this very well presented DBR2 replica into the UK, our client was eager to have it running as well as possible in time for the summer.

The engine had a severe “knock” which needed investigating and this could only be done by partially dismantling the engine.

Upon inspection we found extensive damage to number 2 cylinder bore which looked as if it had been caused by standing water and a subsequent attempt to “hone” out the pitting in the cylinder bores.

The bores were found to be tapered and ‘out of round’ to over .015”

This was a major concern and the cause of the bottom end noise.

After close consultation with the client we agreed to re-build the engine to a fully mechanically sound state with an increase in capacity from 4.0 litres to 4.2 litre.

We provided a fixed price quote (based on the crank/block and cylinder head being in sound re-workable order) and the client gave us the green light.

The engine was subsequently removed from the car and completely stripped and inspected.
The cylinder liners were then removed and the liner location areas (which are often a cause for concern) were inspected and found to be in perfect order. Good news.

At this point we were able to provide a more detailed estimate to our client based on the work needed.

Next, the crankshaft was re-ground to the next permissible undersize and balanced with the flywheel/clutch and front damper/pulley assembly.

The connecting rods were checked, re-sized and bushed prior to balancing.

As part of the cylinder block re-engineering the main bearing tunnel was checked for size and alignment and was found to be within our tolerance of .001” and therefore did not require line boring.
The new rear crank shaft seal was fitted and line bored “in-situ” for optimum oil retention.
The sump face was ‘trued’ to the main bearing tunnel and the cylinder head face of the block was accurately machined in line with the main bearing tunnel before the top liner locations were CNC machined to give the optimum cylinder liner protrusion.
All taped holes were re-tapped and repaired as required. At this point, the cylinder block received a further clean and the liners were fitted before a pressure test was carried out to check for liner sealing.

All was OK so we proceeded to fit our torque plate (this is a clamping plate which replicates the forces created when fitting the cylinder head) and bore and hone to the required size for the new up-rated pistons. Final cleaning and checks prior to assembly then followed.

Assembly of the engine took place in our dedicated "clean room".
All bearings; chains and gaskets were replaced as a matter of courseand all sundry parts were cleaned and checked prior to fitting.

After the meticulous re-build undertaken by ex Aston Martin factory engine builder Mick Durrant, the engine went through a series of further checks on our dynamometer.

After running in and tuning the engine was now ready for installation.
View Images as Slideshow... 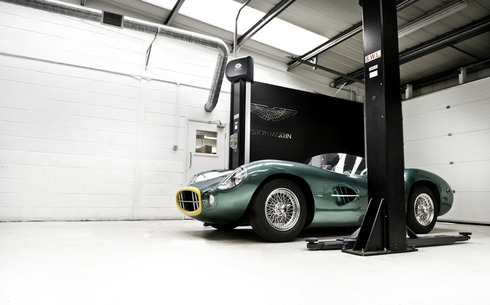 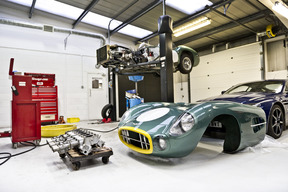 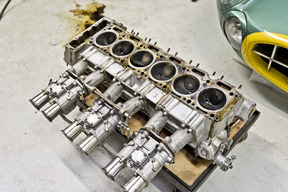 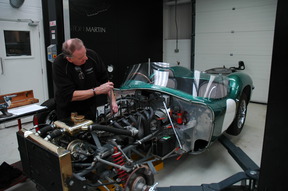 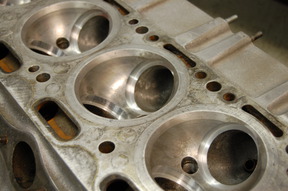 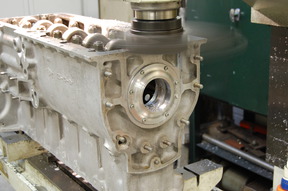 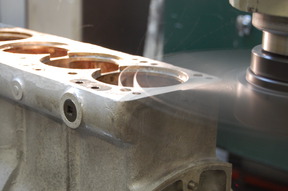 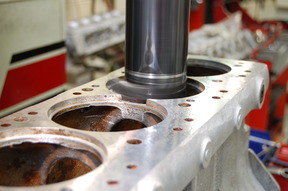 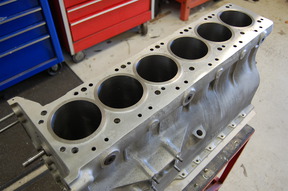 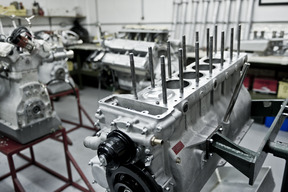 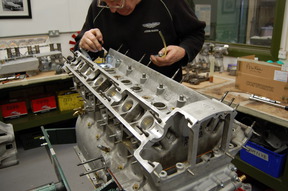 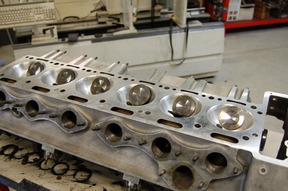 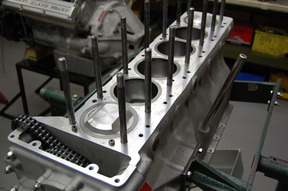 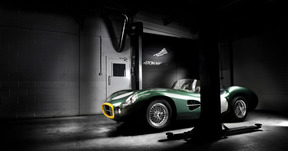 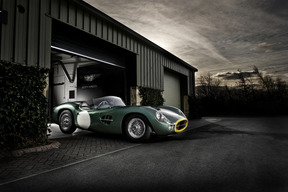