We were contacted by a very exasperated DB9 owner who had entrusted his DB9 to a garage for diagnosis of an engine fault.  Having carried out a compression test, one of the front cylinders had no compression at all. It was decide that the cylinder head would have to be removed. On inspection it was found that 2 valves were bent!  It was decided that the 2 valves (one inlet & one exhaust) should be replaced and the head re fitted.

This was a bad move by the garage as they failed to ask themselves “how did the valves become bent? How was it possible that only one inlet and one exhaust valve should bend?

The engine was started and ran well, for a very short period of time! Then the same symptoms came back. They carried out a compression check on the previously faulty cylinder and to the dismay of the mechanic the exact same readings were observed!

This is where Aston Workshop came in.  Having vast experience in Aston Martin engine rebuilds we have learnt that we should never take anything by chance and always investigate to find the root cause of issues before proceeding with repairs.  The engine was again removed so we could remove the cylinder heads.

On stripping the cylinder heads it was found that again the two same valves were bent.  Initially looking at the valve seats everything appeared to be as it should be.  After cleaning further inspections were carried out.  Looking closely at the inlet valve seats it appeared that the inlet valve seat in the affected cylinder had an “under cut” at the bottom of the seat. This was different to all the other seats.

This valve seat was removed.  On inspection the valve seat had a 45 degree seating area on both top and bottom!  How could this be?

We were now getting somewhere. It appears that this valve seat was inserted upside down what the valve seats were being fitted at the factory.  The seats are pre formed, the top has a 45 degree inner chamfer and the bottom is flat with a radius at the bottom to aid insertion. With the seat being inserted upside down there was no radius, but a sharp edge. This sharp edge had effectively worked as a broach cutter and removed most, if not all, of the required interference that is needed to keep the valve seat in place.  The valve seat was effectively falling out when the engine was hot, bending the valve stem slightly and then returning home when the valve closed.

This would be a major issue for most garages. Here at Aston workshop we have fully equipped machine shop to carry out all aspects of engine building and repairs, in house.  The valve seat bore was slightly enlarged to allow fitment of a larger seat with the correct interference and the seat was fitted and cut using the correct 3 angled seat cutter on our Serdi cylinder head machine.  We also cut all the other valve seats, machined the head faces true and assembled the cylinder heads with new valve stem seals.  The DB9 Engine was re built and fitted into the car. No further issues were present.

Here at Aston workshop we are equipped with all the up to date machinery to enable us to carry out all aspects of engine building and machining for any Aston martin engine.  We pride ourselves in being able to offer a complete package for your cherished Aston Martin. Please contact us to discuss your Aston Martin Engine DB9 building requirements. 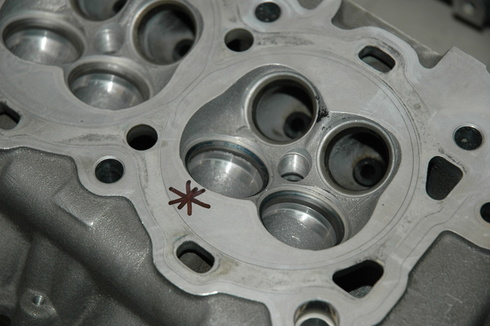 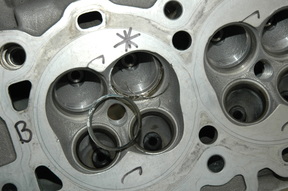 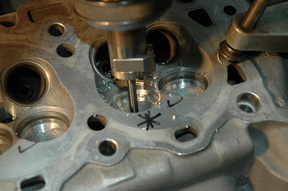 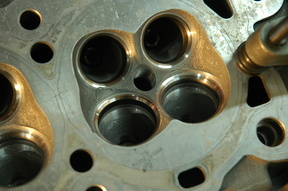 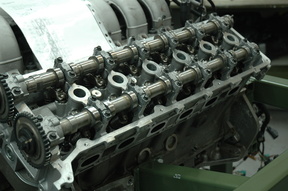